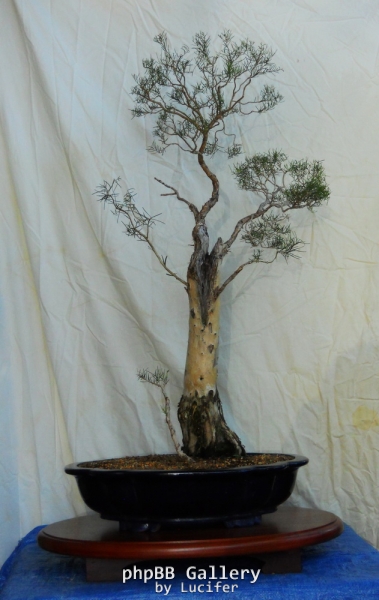 paul od wrote:This tree was collected in the early Spring of 2004 from a small lake in central Perth WA. The tree was beginning to fall into the lake from the erosion caused by the tidal movement. It was approximately 2 metres tall and was cut down to 1 metre. The tree was in a training pot for two years and it was re-potted into the existing pot. After 2 weeks, every leaf fell off the branches and then 6 weeks later, every branch died. I had been told that sometimes these trees will sprout new branches after awhile. Twelve months later, with constant watering, new branches started to form. It has taken 3 years to get to where it is now. The 2 lower branches are only 12 months old. The potting mix is pure akadama. The tree is now 900mm high, 450mm wide and the circumference of the base is 340mm. The top of the tree was carved as there was a hole in the middle and has been painted with bitumen paint diluted with turpentine. The small tree at the bottom was a cutting that was planted 12 months ago.