Create the best possible shohin sized bonsai over an 18 month period between 1st June 2016 and 30th November 2017. There are 2 categories;
Category 1. REFINE - A continuation of entries in the 2013-2014 competition.
Category 2. CREATE - To create the best possible Shohin sized bonsai from raw, untrained stock.
Entry posts must be made no later than Midnight AEST on 31st May 2016.
Forum rules
Please ensure you read all the rules prior to entering.
Post Reply
107 posts 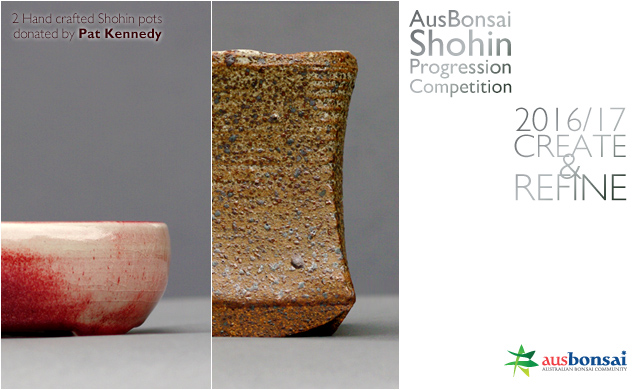 We are pleased to announce the latest AusBonsai Shohin Progression Competition.

The objective of the AusBonsai Shohin Progression Competition is to create the best possible shohin sized bonsai over an 18 month period. This year there are 2 categories as follows;

Category 1. REFINE - A continuation of entries in the 2011-2012 and 2013-2014 competitions. To take your existing shohin and refine them further over 18 months.
Category 2. CREATE - To create the best possible Shohin sized bonsai from raw, untrained stock over a period of 18 months.

This competition is open to all members of AusBonsai provided they abide by and agree with the rules of the contest. All previous (living) entries are permitted to compete in the Refine category regardless if they completed the last competitions or were disqualified.

STOCK
Stock can be obtained from anywhere provided it is RAW, UNTRAINED and no prior STYLING has been done other than ROOT WORK. You can collect, purchase from a bonsai or general nursery, take a cutting/layer from an untrained tree or you may already own suitable stock. It just cannot have had any previous Styling!
Stock must have cost less than $50 per tree and receipts should be shown where possible. If no receipt is available or the value is in question, the Moderators will concur and their judgement will be final.

Our definitions of key words are as follows;
RAW 'not processed, refined, or treated in any way'.
UNTRAINED 'a plant, bush, or tree has not been made to grow in a particular way, e.g. by pruning, wiring or tying it.'
STYLING 'an instance of creating something, especially something artistic, in a particular or idiosyncratic way.' This includes but is not limited to wiring, clip and grow or any other means that has changed the natural growth tree. Previous work done on the roots is acceptable.
ROOT WORK 'the reduction of the root system that occurs during the periodic repotting of a bonsai.'

SUBMISSIONS
Category 1. REFINE - All living entry threads from the 2011-2012 and 2013-2014 competitions have been copied into the new 2016-2017 Shohin Styling Competition forum. To confirm your entry, you must make a reply post in your thread before Midnight EDST on 31st May 2016 containing the following information;
• At least 2 current photos of your stock/bonsai.
• Current height of stock (from top of pot to tip of tree)

Category 2. CREATE - To enter, you must start a "new topic" in the Shohin Styling Competition forum and make the "title" your name and the species of your stock, in this format, e.g.- [Your Username] Species name.
Your first post must contain the following;
• At least 2 photos of your chosen stock before any work commences.
• Species name (any species is allowed)
• Original height of stock (from top of pot to tip of tree)
• Where you obtained it from
• Cost of stock

There is a limit of 3 entries per person in the CREATE category.

STYLE AND SIZE
Any style can be created including group settings and cascade.
Size is measured from the top of the pot to the tip of the tree/s. The finished height must be under 250mm. There is no minimum height restriction.

PHOTOGRAPHS
• Photography is not being judged however the best possible picture/s should be submitted. Review our section on photographing bonsai for tips.
• Photographs must be of good quality, be a minimum of 500 x 500 pixels and in full colour
• Photographs are to be uploaded to AusBonsai and not linked from other sites
• Sub-standard photographs will not be accepted. A PM will be sent to the entrant explaining what was wrong and an opportunity to resubmit will be given. Failure to resubmit with better photographs may be cause for disqualification.

PRIZES
There will be prizes for 1st, 2nd and 3rd place in each of the 2 categories as judged by the members of AusBonsai.
Pat Kennedy from Mirkwood Forest Bonsai Pottery had kindly donated 2 beautifully hand crafted Shohin pots for the first prize in each category.

REVIEW AND JUDGING
• Submissions will initially be reviewed by the Moderators of AusBonsai for compliance with the requirements.
• Judging will be done by the members of AusBonsai via an online poll. Judging will be opened soon after the competition closes and will take place over the following week. Winners will be announced on AusBonsai.com.au.

TIME-FRAME AND COMMITMENTS
• Entry posts and/or commitments must be made no later than Midnight EDST on 31st May 2016. No new entries will accepted after this date.
• Work can be done between 1st June 2016 and 30th November 2017.
• You must make a minimum 3 monthly progression update including photos, an overview of work completed and experiences. Updates must be made within the following EDST periods - 1st June to 31st August 2016, 1st September to 30th November 2016, 1st December 2016 to 28th February 2017, 1st March to 31st May 2017 and 1st June to 31st August 2017 then the final submission. Monthly updates are encouraged where there is substantial growth or techniques to show.
• Final submissions and photographs must be submitted no later than Midnight EDST on 30th November 2017.
• Entrants are encouraged to display the final tree in Bonsai pot but this should not be done to the detriment of the tree.
• The final pictures must include at least one paragraph of text describing the final outcome and what is planned for the future of the tree.
• Final submissions must contain at least two quality photographs, one with a plain background and one with a ruler to verify the finished size of the tree is under 250mm tall. You may submit as many photographs as you like from as many angles as you like.

The fine print:
• Please read all rules and refer back to them before submitting your before, progression or final photographs to prevent misunderstandings or disqualification.
• Contest is void where prohibited by law.
• Photos cannot be altered in any way other than adjusting contrast, lightness and colour saturation. Cropping and rotating to level the photographs is also allowed. No Photoshop, manipulation, editing etc.
• All work must be completed by the submitting artist.
• Discussion, advice and comments in the entry threads is encouraged, but please "No Virtuals".

Most importantly, have fun!

Yours in bonsai,
Steven
Last edited by Steven on June 1st, 2016, 2:55 pm, edited 1 time in total.
Reason: Added 0 to 30th. Thanks to Melbrackstone for pointing it out.
Check out the AusBonsai Store ǀ Wiki ǀ Blogs ǀ Gallery ǀ 360˚ ǀ
Remember to be polite and abide by the Spirit and Intent of AusBonsai
Top

Now I wish I hadn't already work on some of the stock I bought...
-Jarad

I might just have a go this year...
Top

Now I wish I hadn't already work on some of the stock I bought...

Bwahh that that is always the issue, I have some in the same boat!

just gives more reason to buy another tree or 2

For those members that are looking for their old comp entries, we have culled all entries that had never been worked on in the original competition and a few others from past members that are not eligible for some reason or other. If you think we may have been too overzealous then send us a PM and we can look into it

Enjoy the Comp everybody

And thanks heaps Steven

I am already treading on VERY thin ice... I will definitely enjoy spectating though.
-Jarad

I am already treading on VERY thin ice... I will definitely enjoy spectating though.

do what I do, buy one for her

Was hoping for another one of these competitions. Now I just have to choose the trees to work on.
Top

I am already treading on VERY thin ice... I will definitely enjoy spectating though.

do what I do, buy one for her

I will just work on the ones I have, then relocate them for a while.
-Jarad

so would airlaying count as "refine" i have a layer ready to come off in spring that defiantly fits the shohin cat .
Top

Is there a minimum height for the tree; does the term Shohin include Mame trees, or would they be too small?
I have a couple of littluns in nursery pots that I just might enter if they fit the bill!
Cheers,

so would airlaying count as "refine" i have a layer ready to come off in spring that defiantly fits the shohin cat .

from what i understand that would be "create"... But I might be wrong.
Top

so would airlaying count as "refine" i have a layer ready to come off in spring that defiantly fits the shohin cat .

from what i understand that would be "create"... But I might be wrong.

I believe the "create" section is for untouched nursery stock...
-Jarad

The rules do say cutting or layer... With the proviso that it has not been styled/ worked on...is raw, so agree I think it would be in the create category.
Top

The refine section is only for previous entries - go and have a look and see if your previous entries are there. As Ken said please PM a mod if your tree has since passed or passed into someone else's possession.

It doesn't matter how high the entry is before the competition starts - it must be 250mm or under at the end.

An air layer or cutting is acceptable as long as the branches haven't been wired or any other stying work done to it.

If we see something that has been attacked by the dreaded wire worm it is out.

"The problem with quotes found on the Internet is that it's hard to be sure of their authenticity." Abraham Lincoln
Top

matlea wrote:The rules do say cutting or layer... With the proviso that it has not been styled/ worked on...is raw, so agree I think it would be in the create category.

Yep so long as the bit you are layering off has not been worked on to shape or style it then all is good.